Earlier this week I wrote about the OutWrite day I went on with Rob Richardson of WriteInvite, and the first mystery location we went to – Southsea Castle. 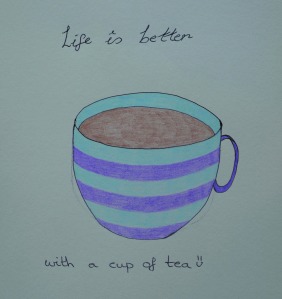 The second location was completely different but just as inspiring, and prompted a wonderful variety of stories from our little group of writers. The location: All About Tea, the tea company whose factory and shop can be found on Middle Street, Portsmouth. This place of enticing smells and intriguingly-named teas is also housed in the former University of Portsmouth print room, above which I used to work!

After wandering down the aisles and sniffing the contents of so many tester bags I gave myself a headache, I settled down into one of the settees in the shop area, a pot of Portsmouth Tea by my side, and started to write. This is my story…

My first cup of tea was nothing special. When I was a child my mum’s friend Sandra would come over for a natter and a cuppa, and I’d hear the clatter of crockery and the tinkle of teaspoons as they sat downstairs in the kitchen.

The click of the kettle became synonymous with lazy Sunday afternoons and the pleasure of idle gossip.

Whenever we got in from a cold wintery walk dad would pop the kettle on and I’d sit there guzzling my Robinson’s Special R while my parents warmed their hands on their cups and sipped the hot tea, followed by a customary “aaah!”.

I thought of it as a rite of passage, the drinking of tea, like an initiation into adulthood. Imagine my disappointment when, aged 15, I finally had my first, long-anticipated cup, only to find it tasted like armpit and old socks.

They say that sometimes in life the timing just isn’t right, and it was that way for me with tea. At the tender age of 15 I hadn’t lived enough of life to truly appreciate a good cuppa. My young bones had never felt the gnawing exhaustion that a steaming cup of tea can heal. Quite simply, I just wasn’t ready for it.

Today I am ready for it. Three weeks ago I broke up with my best friend, my boyfriend of five years and living companion of three. I have felt the weariness, the angst, the general being down in the dumps, and as I stand at the counter ordering a “pot for one please”, today I feel, more than ever before, I really could do with a cuppa.

Carrying the pot carefully over to a table, cup and saucer in the other hand, I think back to those gossipy conversations in the kitchen with Sandra and mum. There’s no-one here for me to gossip with, but I don’t mind. After five years, it will be nice to have a little me time.

I lower the cup and saucer on to the table, and ever so slowly tilt the pot until the hot brown tea gushes out of the spout. As it sloshes around in the cup I breathe in its comforting tangy scent. A sugar lump joins the dash of milk I pop in, then a little stir and I’m ready. I clutch the mug with both hands and slowly raise it to my lips.

I don’t know what I’m expecting. Fireworks or maybe a kind of taste explosion. I get neither. But what I do feel as the warmth of the tea fills my mouth and spreads to my belly is the sure, safe, cosy feeling of contentment.