When a piece of art has a sign telling you it’s a piece of art, the timeless question of ‘what is art?’ raises its complicated head. If you have to tell people that something is art, then is it really art? Do we have the right to say what is art (and what isn’t)?

I was in Southampton a few weeks ago when I came across a multi-coloured rhino sculpture in the city centre. The piece stood out so brilliantly against the grey buildings and roads that I had to stop and take a closer look. Just across the road I found another rhino, this one bottle green in colour. Below each sculpture was a plaque reading: This rhino is a work of art. This made me chuckle a little at the irony of actually pointing out that something is a work of art, but when I later typed ‘rhino sculptures in Southampton’ into Google the use of these words made a lot more sense.

The rhino sculptures are part of a public art event called ‘Go! Rhinos’, a project bringing art to the streets of Southampton and highlighting the conservation threat faced by the wild rhino. The project is led by Marwell Zoo, in collaboration with Wild in Art, Business Solent and Southampton City Council. For ten weeks between July and September a collection of colourful rhino sculptures went on display in the streets and parks of the city. The large rhinos were painted by artists and sponsored by local businesses, and the smaller rhinos were decorated by local schools, colleges and community groups. The necessity for a plaque proclaiming each rhino as a work of art thus makes sense. It’s partly to point out that these quirky little fellas are not in fact to be used by any passing child as a climbing frame, and also to highlight the Go! Rhinos project itself, and the use of creativity and the local art scene to bring attention to important conservation issues. 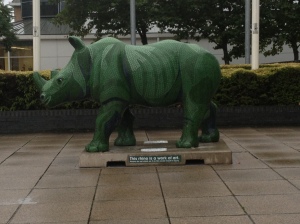 The day I came across the two rhinos was actually the last day they were on show. The next chance to see all of the rhinos will be the Rhinotastic Event at Marwell Zoo from 10–14 October. The event will include rhino talks where the public can learn more about the rhinos at the zoo, the chance to see the winning sculpture of the ‘Design a Rhino’ competition, and a raffle to win a blank Go! Rhinos sculpture. There will also be a charity fundraising auction on 30 October at the Grand Harbour Hotel, Southampton. All proceeds from the sale of the rhinos will go to Marwell Wildlife, The Rose Road Association and Wessex Heartbeat’s High 5 Appeal.

So, should you really have to tell people that something is a work of art? If it looks like a rhino, the answer is yes!