Here is over. After a fantastic ten weeks of rehearsing Here by Michael Frayn for the Southsea Shakespeare Actors (SSA), my job as director is done. We did three performances last week in a local wine bar, Rosie’s Vineyard, in their ‘conservatory’ space out the back. Audience numbers were good and the review in the local paper was brilliant. 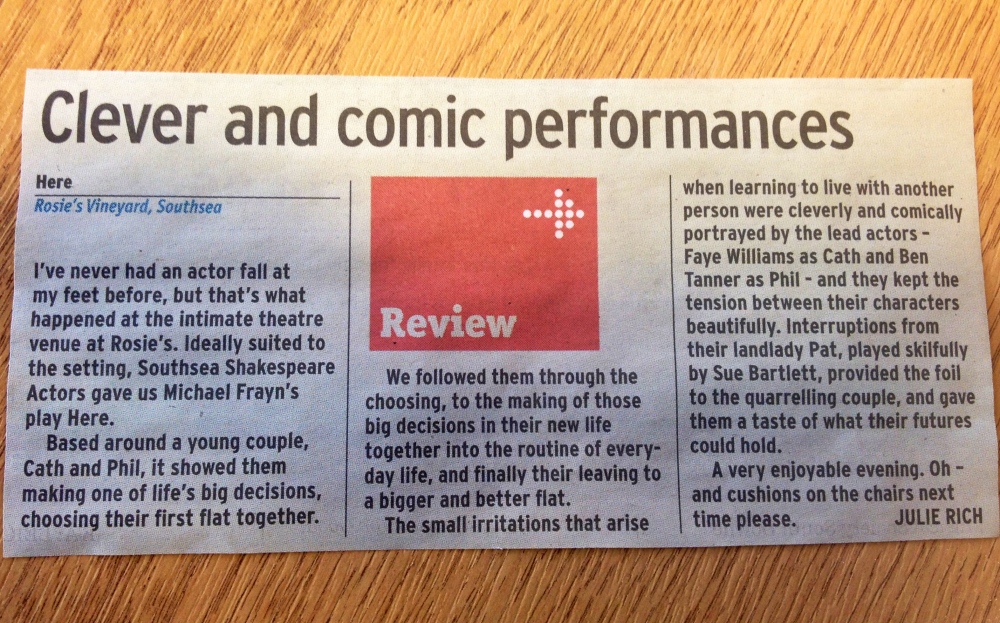 Now that a week has passed I can look back on the whole experience and identify what lessons I have learnt, that I can hopefully take forward to my next directing project.

I wasn’t sure how many rehearsals to fit into the ten-week rehearsal period we had. In the end we got to rehearse each section twice and then several times in the full and half runs, however it would have been nice to have had one more rehearsal for each part to really fine-tune it.

As for planning the rehearsals themselves, I think organisation is key. I planned what section we would work on in each rehearsal, but within that I could have structured the rehearsal itself better. A solid warm-up at the start of each rehearsal, a set amount of time on each key bit covered in that rehearsal, and a wash-up at the end would have made sure we all got the most out of the limited time we had.

A few weeks into rehearsals I introduced a few activities, such as contact improvisation and some ‘grounding’ exercises for the voice. I think it would have been beneficial to have planned regular rehearsals where these would feature – being proactive, rather than reactive.

Set can often be the tricky bit – you’ve got an inspiring and well-written script, a cast of fantastically talented and hard-working actors, and now you’ve got to somehow transform an otherwise bland room into a family home, or a doctor’s surgery, or even the middle of a jungle. It’s not just the actual practical creation of the set that I admire, it’s the set designer’s overall vision; how they can look at a space and visualise this world they’re being asked to create.

There were two key components of the set for Here that caused me grief from the start – the first being doors, the second an alcove. I left it too late to realistically install fully functioning doors. We do have several stage doors kicking around at HQ, where we rehearse, and the other place we own where we store a lot of the company’s stuff, aptly named ‘The Other Place’. However, we would need to find someone with adequate transport to get these great slabs of wood over to the venue, there would be little chance of them being the correct size to fit in the set we were creating, and we had no way of affixing them to the rest of the set (largely because it was nonexistent).

In the end I went for black curtains – not particularly imaginative, but they were easy to put up in the venue (which had beams running in between pillars around the edge of the room and the wall – perfect to tie and drape fabric over). Perhaps the mix of realism and representation didn’t work for everyone, but we made the best with what we’d got.

The alcove was again left a little late in the process, however on of the actors came to the rescue. Working at a builder’s merchant, he could get us materials at a good price and had the know-how to assemble everything, with the very kind help of his dad. He used the beams in the room to create the alcove by cutting two pieces of hardwood to size, building a frame to reinforce the two sheets, then using plastic ties to attach the wood to two parallel cross beams. He fixed a metal pole between the two sheets and I bought a shower curtain from Primark to go on this. The curtain wasn’t ideal, and it did made that telltale ‘swish’, but at first glance it wasn’t so obvious it was a shower curtain rather than an ordinary fabric one. Either way, it was the cheapest option!

Most of the props weren’t too difficult to source. The main issue was finding two identical jumpers in different sizes that were large enough and with stretchy enough necks to fit two heads in. If this sounds bizarre, there’s a scene in the play I call ‘the jumper scene’ – just before the end of Act 1 – so have a read and all will become clear. 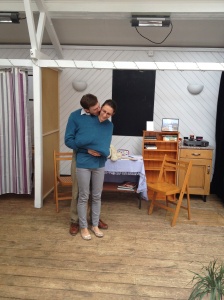 We realised what we really needed were some v-necks, but of course all the shops seemed to have decided v-necks were sooo last season and gone in for high round-necks; a very impractical jumper for fitting more than one head in without garroting your female lead.

Just as I was contemplating tearing the necks of a pair of round-necks we’d found my stage manager and head of props managed to find the perfect baggy, stretchy v-neck jumpers in Matalan. Result!

Revelling in the magic of the rehearsal room it’s all too easy to forget the practicalities of putting on a show – ticket prices, marketing, and of course any concerns with the venue. I’d chosen to put on a play where one of the actors spends half the time in a woolly jumper, in a room known as ‘The Conservatory’ for its glass ceiling, in the last week of July. Not the brightest of sparks sometimes, but of course the prospect of several audience members fainting and an actor sweating within an inch of his life didn’t occur to me until two weeks before the show.

My lovely marketing lady who also ran front of house had the genius idea of iced water, so we sent someone out to get plastic cups and a big bag of ice. Consequently the audience survived, as did the actor, though I’m not sure the jumper was particularly pleasant after the final performance.

There’s so much more to directing than I could ever have imagined. You’re not only the captain of the ship, you’re a mentor, a shepherd, a quick-thinking, super-planning, creativity-inducing organisation machine. At the best times it’s been exhilarating, at the worst, stressful and exhausting, but all along it’s been an interesting and invaluable experience. And I can’t wait to do it again…

Click on the thumbnails below to see larger images of the cast – Ben Tanner as Phil, Faye Williams as Cath, Sue Bartlett as Pat – during the dress rehearsal, plus a few props shots: